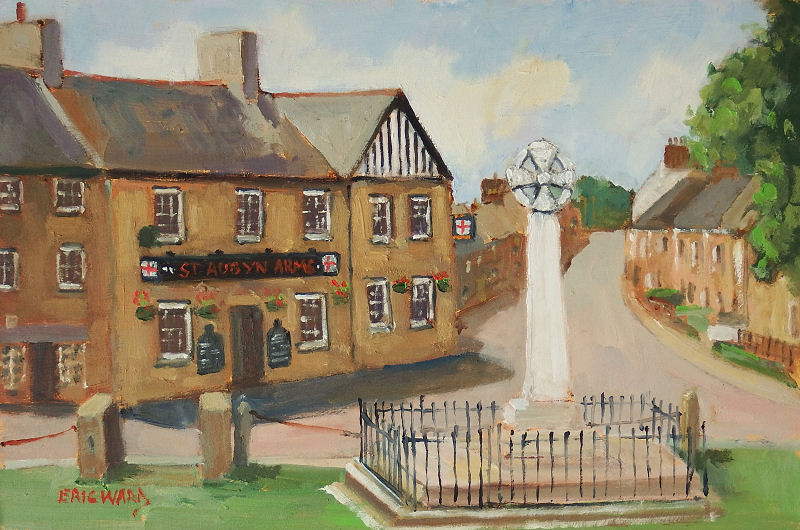 A concise history of Praze an Beeble and the St Aubyn family.

The St Aubyn Arms is one of the original building in the settlement of Praze.

There was a manor house at Clowance from the 13th century and around the 1400s it became the home of the St Aubyn family. From 1426 Geoffrey St Aubyn farmed the tithe of Clowance under the Abbey of Tewkesbury. The estate itself would have been a provider of employment for the local people, and the village of Praze an Beeble developed around its north eastern boundary. The surrounding countryside was a prosperous farming area with a number of medieval settlements. The village is situated in an area famous for its late eighteenth and early nineteenth century mining activity. The nearest operation was at Trevoole a mile and a half to the north of the settlement on land owned by the St Aubyn Estate. Another early mine in the district was at Binner Downs, a copper producing mine first recorded in 1758; although some three miles to the west all the intervening land was part of the St Aubyn’s Clowance estate. Another mine just to the south of the estate at Crenver was in production at least by the second half of the eighteenth century, while there was a suggestive field name recorded on the Tithe map just north-east of the village (Wheal-an-gogue). Praze stood in a central position to these various mines situated on St Aubyn lands and, although most were at some distance from the village, it may have had a service and marketing role.

The settlement of Praze-an-Beeble is not mentioned until 1697; its name means the pipe meadow or drained area, and the village, such as it was, followed the course of the east-west flowing Beeble stream as it ran alongside the ancient cross-county route to St Michael’s Mount (now the B3280). By 1779 the vicar of Crowan reported 500 families living in the parish, but we do not know how many were in Praze an Beeble itself. It seems likely the village initially developed as a staging post on the major historic cross-county route. This suggest that from the outset the village was different from its farming neighbours – a creation of the St Aubyn’s as part of their estate assets, conveniently close to their estate, the mines, the farms and a major crossroads; this is a theme that recurs in Praze’s history. Whether the settlement was an ‘industrial’ or agricultural service centre or a sort of estate village attached to Clowance is a moot point. The early development took place mainly around the crossroads and the village’s earliest buildings – the inn, smithy and two coach houses – would all appear to confirm this. There was mention as late as 1939 of a medieval wayside cross in the village, but its exact location is not known. By 1801 the population of the parish of Crowan, one of the major industrial parishes of 18th century Cornwall, stood at 2,587.

During this period the village expanded almost to its fullest extent until the late 20th century developments. The overall population of the parish continued to grow – in 1811 the census return listed 3,021, which had risen to 4,638 by 1841. 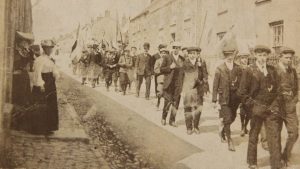 Rows of stone cottages fringed the road leading north to Camborne, and to the mine at Trevoole. These were set in an orderly pattern with regular plot sizes suggesting a planned development, while the road itself was straightened and diverted from its ancient course to the north west via Trefewha, and given a marked elongated funnel shape opening out into the small square at the main crossroads. This was a planned extension, undertaken in a very short space of time (there was nothing there in 1809, the Chapel, more than half way along the street, was built by 1828), and can only have been undertaken under the auspices of the St Aubyn estate for both estate workers and miners. One interesting aspect of the growth of Praze was that it happened at the same time as the disappearance of a number of small cottage groups along Cathebedron Road, probably squatters on the edge of commons west and north-west of the village (Howe Downs/Penhale Moor); clearly marked in some density on the 1809 OS map, they had all gone by mid century – a consequence of enclosure and agricultural improvement. The relocation of much of that population may account for some of the growth in Praze, and suggests it was not a simple industrial settlement. The uniformly good quality of the buildings further suggests estate cottages, and the long strip of gardens to the rear, large enough to grow vegetables, were typical of mine workers’ cottages throughout the county, but also of agricultural workers. Another feature, more typical in this part of Cornwall of industrial settlements, was the Nonconformist chapel – a Wesleyan Methodist chapel built around 1828. The earlier Inn and coach houses were integrated into the development, and it was clearly more than just a miners’ village – with inns, commercial stabling/carriage housing, smithies and so-on, it appears to have been an important local transport and service centre, responding to the demand from the surrounding mines, the still prosperous farming community, and the busy roads through the village.

The Post Office Directory of 1856 illustrates the extent to which the village had become a centre of local commerce. Listed were two shop keepers, two grocers, and two publicans at the St Aubyn’s Arms and the Royal Standard Inn. The Directory also gives an insight into the importance of the mines to the local economy as the village accommodated three carpenters, two boot makers, a wheelwright and a blacksmith – all trades associated with mining.

The village expanded physically to the east and to the north (along the new course of the main road beyond its old turning point to the north-west), with much of the new development in the form of cottage rows. There were seventeen new residences built at this time including Trethannas House, a sizeable building set in its own grounds. Unlike many other industrial settlements Praze an Beeble housed a number of professional people including a mine agent, a vet, a County engine reporter, and a registrar. A formal open space at the southern end of the village was created, possibly the venue for the yearly cattle fair. Despite the village’s thriving economy the overall population of the parish began to fall during this period as the mines began to close down. In 1851 the population stood at 3,984, but had fallen to 3,464 by 1871.

In 1887 the Helston Railway Company opened a branch line from Gwinear Road to Helston with a station at Praze an Beeble; the historic role of the village as an important local transport interchange developed on a new level. The line was worked from the outset by the Great Western Railway and linked the village with the town of Helston and the mainline, providing access to Camborne, Redruth and beyond.

Despite the drop in population of the parish of Crowan, 2,603 in 1881 falling to 2,243 by 1901, Praze an Beeble remained an important commercial centre. Praze shared some typical churchtown functions with the actual churchtown at Crowan (less than a mile away). The village could still support two pubs, four shops, a butcher and a shoemaker. There was also now a new school just outside the village on the eastern side (actually the Crowan Board School rather than simply Praze School), a new Free United Methodist Chapel, a Sunday school, a post office and a village hall. The thriving nature of the community in contrast to the decline and collapse of the local industry reflected the influence of the new railway providing access to other centres of employment for the villagers. Indeed the village continued to expand at this time with many of the new houses located at the southern end of the village near the new station. The influence of Clowance perhaps still counted for much – the grounds were still famed in gardening and horticultural circles until 1921 when the Clowance branch of the Molesworth-St Aubyn finally sold the estate after 640 years.

The population of the parish continued to fall with 2,066 persons recorded in 1911 and 1,838 in 1931. The continuing presence of the railway, however, resulted in a small growth in the physical size of the village. Ten further detached and semi-detached houses were built on the road to the station, and a new garage. The chapels, school, post office, shops and pubs continued to flourish.

The roads which first encouraged development in Praze an Beeble have continued to ensure the community’s viability. Its close proximity to the conurbation of Camborne and Redruth and the town of Helston has ensured that, even after the closure of the railway in 1963, the village continues to thrive. Although the chapels and one of the pubs have closed there are still a number of shops, a village hall, the St Aubyn Arms and a convenience store/post office. As always, the Clowance estate remains an important factor in the local economy, now as a thriving time-share and leisure facility.

The first member of the St Aubyn family to move to Cornwall was Guy St Aubyn who married the heiress of Colquite in the mid fourteenth Century.

His son, Geoffrey, married even more advantageously, his wife Elizabeth being the only child of Piers Kemyel of Clowance House (near Helston). Clowance became the principal family home until the mid-19th century and the Kemyel inheritance included lands at Lamorna and St Levan which form part of St Aubyn Estates today.

During the English Civil War, Colonel John St Aubyn was a Parliamentarian who in 1647 was appointed Captain of St Michael’s Mount with a remit to secure the peace in the neighbouring area. Twelve years later he bought the Mount from the Bassett family, who had been temporarily impoverished by erecting extensive defences on the island for the Royalist cause. His son – also John – was made a baronet, and was the first of five successive Sir John St Aubyns.

For almost two hundred years, St Michael’s Mount remained a subsidiary home, although the third Sir John retired there and rebuilt the harbour, leading to a revival of the island as a trading centre until it was overtaken by the coming of the railway and development of Penzance’s harbour. He also served as a MP, earning the exasperated respect of Sir Robert Walpole, who said of him “All these men have their price save the little Cornish baronet”.

His grandson, the 5th Sir John was an extremely cultured man, but he led an exotic private life. He had fifteen children, all illegitimate, although he did marry Juliana, the mother of the last nine, once she was past child bearing age. One consequence was that Clowance passed through the terms of its entail to his sister’s son, although Sir John was free to leave St Michael’s Mount as he wished.

Two generations on, the family fortunes had revived sufficiently for another John St Aubyn to build the Victorian wing onto the castle, and complete its transformation from a priory via a fort to a mansion house. This John was also a MP for thirty years, and on his retirement was made Lord St Levan in 1887 for his political services. It was his grandson, the third Lord St Levan, who gave St Michael’s Mount to the National Trust, under an unique arrangement whereby the family have a 999 year lease to live in the castle and a licence to operate the visitor business.

In 2003, James and Mary St Aubyn moved to the castle with their four children. They in their turn became Lord and Lady St Levan when the previous Lord, James’s uncle, died in 2013.